I’ve been using Neovim for years, but the other day I made a delightful discovery: you can write plugins in Ruby! There’s even an officially-supported library for it.

Let’s take it for a spin and see what it can do.

The unseen hand of RPC

Neovim’s architecture supports the concept of remote plugins. These can be implemented as a process which receives RPC calls from the editor, and vice-versa.

neovim-ruby has a small example of how we can start a Ruby process and connect it to a running instance of Neovim. I took it a step further and used pry so I could play around in a REPL:

… and then boot the Ruby console. And voila! We can drive Neovim from Ruby 🤩 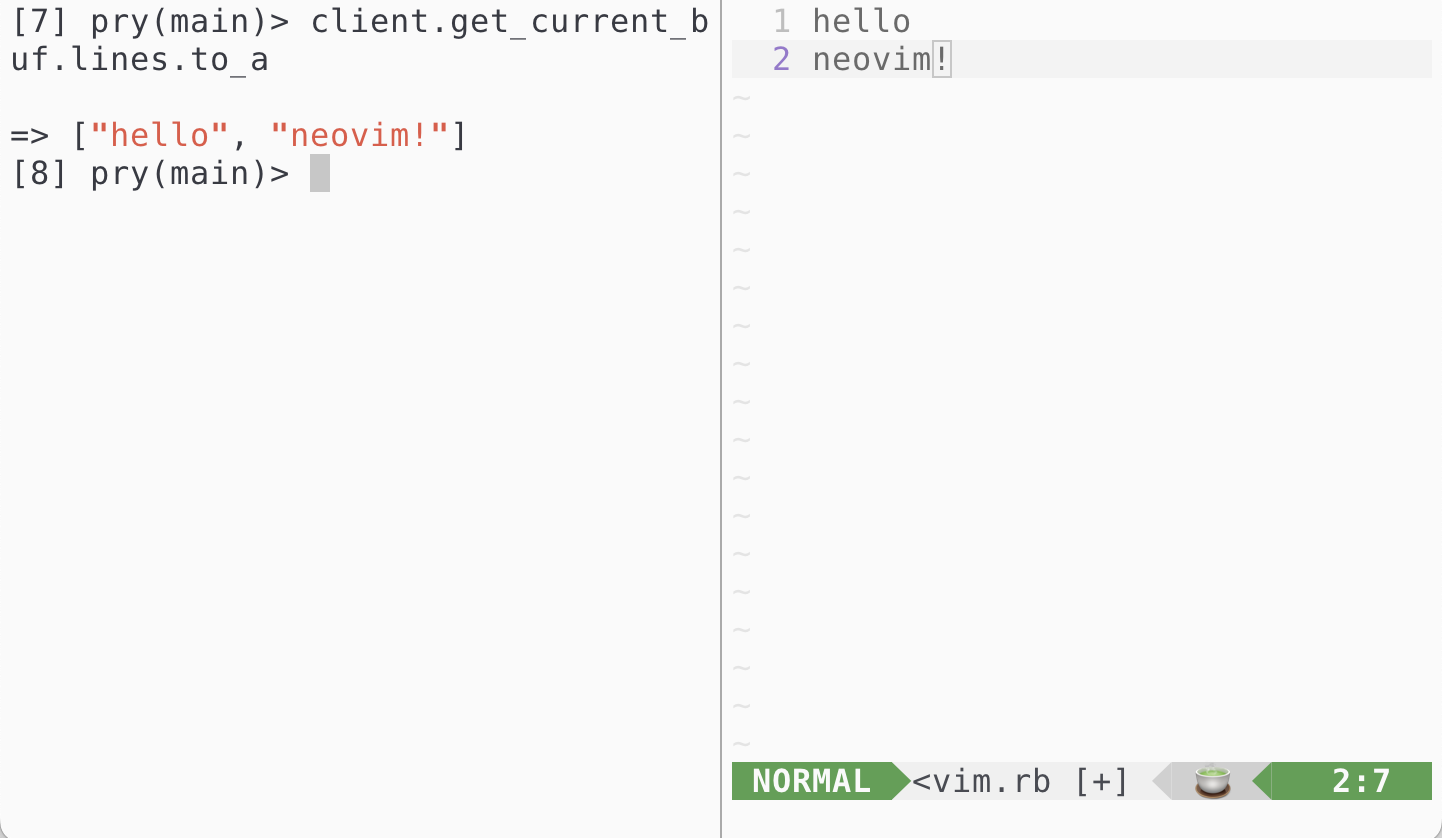 neovim-ruby gives you a nice object-oriented interface into the editor. Here, client is Neovim itself, and I can access the currently-visible buffer with get_current_buf.

This is all well and good, but let’s have some more fun! Can we programatically insert a new line into the buffer? Of course we can:

Of course, booting a side process like this is fun, but not very practical. If we really want to drive Neovim with Ruby, we can write a remote plugin.

neovim-ruby lets us define a vim command as a block which will be called when that command is invoked in the editor. The “hello world” looks like this:

Just like in our REPL, we’ve got access to the Neovim client itself, as the first argument to the block. If our command took arguments, those would get passed too.

Armed with this newfound power, I was thinking of something interesting I could do.

I always liked the “inline REPL” that Avdi Grimm uses for his Graceful.Dev (formerly RubyTapas) screencasts. It lets him write a line of code in his editor, where it can be evaluated and returned as a comment. Kind of like this:

That sounds fun. Let’s build it!

First, we need to define our command. EvalRuby seems like a fitting name.

I want to be able to select one or more lines to evaluate, so my command will need to work on ranges. According to the Neovim docs, we just need to declare this up front:

range_start and range_end will be the line numbers of the selection, or they’ll be the same if we’re only selecting a single line.

Next, we need to pull out the content so we can eval it! neovim-ruby gives us a handy lines array in the current buffer. Since this array will be zero-indexed, we need to account for that:

Now that we’ve got the code, we have a legitimate excuse to use eval. Hopefully we trust our own input 🤓

To account for syntax errors, or lines that just aren’t Ruby, we can rescue any errors and spit that out as a comment, too.

Now that we’ve got the result, we can close the loop by appending it back into our editor below the selection:

And, behold! It works great 🎉

This was a fun project, and I think I’ll actually get some use out of it, too; I often find myself jumping into IRB while I’m coding to try things out or demonstrate something while I’m pairing.

Now that I wield this power, I can see myself making all sorts of fun plugins.

If you want to check out the full code for EvalRuby, I’ve put it up as a gist!